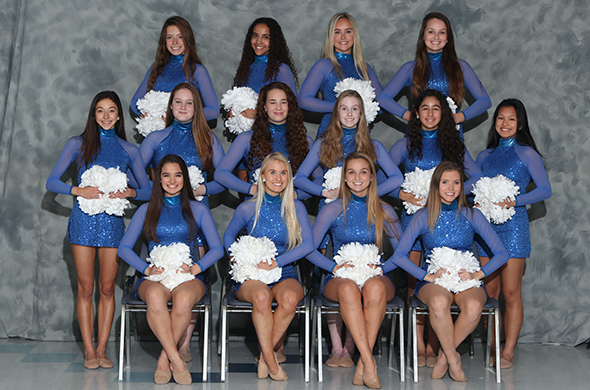 Coach Chrissy was born and raised in Northern Virginia, and a 1995 graduate of Bishop O'Connell High School. She was a four-year member of the Royalette Dance Team, a two-year officer and held the position of captain her senior year. Coach Chrissy came on as assistant coach in 1999 and was named head coach in December 2000. In 2009, the Royalettes attended camp with the Universal Dance Association, where she was given the Exceptional Coaches Award. Also, Bishop O'Connell awarded Coach Chrissy the 2014-2015 Coach of the Year. In 2015, she was named the Director of Spirit Teams for O'Connell. She is a proud graduate of Virginia Tech with a degree in Hospitality and Tourism Management. Since 2008, she has worked for the Greater Washington Board of Trade. She was their Director of Meetings & Events for almost eight years, and is currently their Director of Marketing & Sponsorship.

Coach Kelsey was raised in Northern Virginia, and a 2004 graduate of Bishop O'Connell High School. She was a 4-year member of the Royalette Dance Team, a 3-year officer and held the position of captain her senior year. Coach Kelsey has been choreographing for the Royalettes since she was a freshman, and came on as assistant coach in 2006. She is a 3-time All-American and represented O'Connell in the Macy's Thanksgiving Day Parade her senior year. Coach Kelsey has danced since the age of 2, with a focus in tap, lyrical/contemporary, jazz, hip hop and ballet. She graduated from George Mason University with a degree in Communications. Since 2012, Coach Kelsey has been a dance instructor for DeGrasse Dance Studio. She has been recognized with numerous awards for her choreography.

Coach Wanda is the former three-year Director/Choreographer of the NBA Washington Wizards Dance Team. Prior to joining the Wizards Dance Team, as a dancer in 2003, she was a member of the Washington Redskins Cheerleaders for two years. Coach Wanda worked as an instructor/head instructor for Universal Dance Association for seven years while working as a territory manager for UDA and sales representative with Varsity Spirit Fashions. She is also the former captain/choreographer of the fourteen-time national championed Towson University Dance Team and former coach of the George Washington University “First Ladies” Dance Team. Currently Coach Wanda is the Operations Manager for Tippi Toes Dance and the Owner/Creative Director for Premier Dance DC.