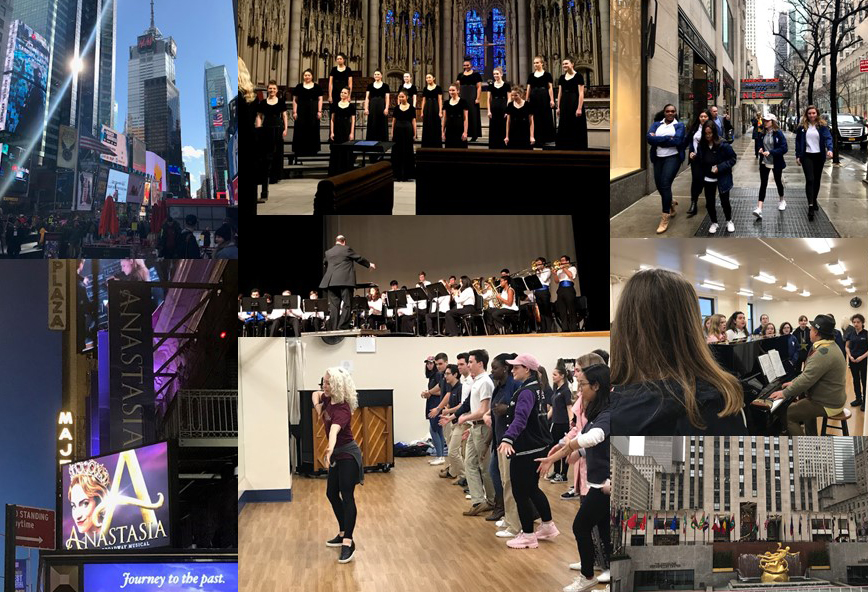 On Thursday, March 21, 96 students and 23 chaperones departed by bus from Bishop O'Connell, heading to New York City to compete in the WorldStrides New York Heritage Festival music competition. In addition to performance opportunities for instrumental and vocal ensembles, this year's trip was open to students involved in drama and included a full schedule of programs and events.

On their first day in New York, students had lunch at Rockefeller Center before participating in one of two program options: a Broadway rehearsal workshop or a tour of the Lincoln Center for the Performing Arts. After dinner in Times Square the entire group attended a performance of the New York Philharmonic conducted by Jaap van Zweden.

Festival performances by each of O'Connell's music ensembles took place the following day at the historic Riverside Church in Morningside Heights near Columbia University. Each ensemble--Combined Symphonic and Concert Band, Jazz Band, Strings Ensemble, Women's Camarata (chorus), O'Connell Singers (women's select chorus) and O'Connell Knights (men's chorus)--performed for 15 minutes on stage. A panel of three adjudicators provided written and recorded feedback for each performance, followed by mini-clinics with one of the adjudicators. While the music students prepared for the competition, drama students visited the Museum of Modern Art and then joined the orchestra students for a tour of The Juilliard School. After dinner, the group attended the Broadway production of "Anastasia" at the Broadhurst Theater.

On Saturday, students had several opportunities to choose from, including a drama tech workshop, a Broadway matinee, or some free-time sightseeing in the city. In the late afternoon the group attended the WorldStrides Heritage Festival awards ceremony followed by dinner and dancing aboard a Circle Line Cruise on the Hudson River with views of the city line and the Statue of Liberty.

The trip was capped off on Sunday, when the entire group attended Sunday Mass at St. Malachy's Church (The Actors' Chapel) in Times Square. The O'Connell Singers and O'Connell Knights were featured as the visiting choir performing part of the music liturgy.

Congratulations to the following ensembles on their competitive performances: