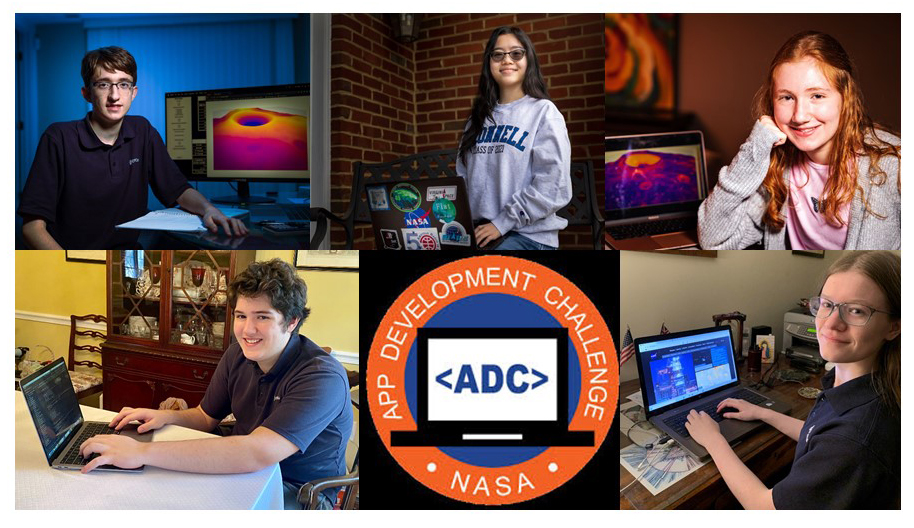 On January 8, 2021, a team of students from Bishop O’Connell High School in Arlington learned via a livestream awards program that their submission to the 2020 NASA App Development Challenge (ADC) had earned them accolades and a coveted spot in a NASA leadership event in February.

The team of Alex Janninck ’22, Daniel Kippenhan ’22, Elaine Ly ’21 and Claire Toia ’23 worked together in a virtual format alongside their fifth teammate, Sevginaz Gurleyici ’23, from the Madeira School in McLean, to code a navigational and graphical application. For NASA, this program is designed to engage the next generation of scientists and engineers in their Artemis endeavors to land American astronauts on the moon by 2024.

Their challenge was to develop an application that could navigate the terrain of the lunar south pole. The team needed to visualize the moon’s surface, establish a reliable and efficient pathfinding algorithm between landing and destination points, and identify ten communication checkpoints along the given route. To this end, they were given multiple data files, which contained millions of data points for processing, and seven weeks to complete the challenge. There was no specified programming language or method by which the team had to execute the application, which allowed for creativity and exploration.

O’Connell’s team encountered and overcame numerous obstacles within the challenge itself. In response to time management, the team coordinated group chats, schedules, and aimed to divide the workload evenly. Additionally, they implemented a mentorship program, as some members were inexperienced with the Python programming language. Team members coded in real-time using “Code With Me,” a newly-released Integrated Development Environment (IDE) plugin that allowed for greater cooperation.

“I’m appreciative of this learning opportunity,” said Alex. “Not only did I learn how to lead a team, but I also learned how to manipulate large data sets—6.5 million numbers, in this case. This project made me realize that I can combine my passions for aerospace engineering and programming into a possible career: writing simulation software for the aerospace industry.”

Daniel voiced how the experience exceeded his expectations. “I was surprised that our app made it past the first step in the grading process, and I didn’t know what to say when we were selected as one of the winning teams,” he said. “I am happy with the final result and how we worked together as a team.”

“When I first agreed to this project, I never thought that we would have more women than men on the team,” said Claire. “Since there’s always talk about getting more women into STEM, it was nice to see girls my age interested in engineering. I love that I was able to be part of a strong team that worked well together.”

During the award announcement, the O’Connell team was lauded for their strengths in both the coding and non-coding aspects of the challenge, utilizing different platforms to create a successful app. The five of them eagerly anticipate NASA’s culminating event, where chosen schools across the country will gather virtually to witness the impact of their contributions and engage with NASA leadership.

“Before the team even knew the full parameters of expectations for the contest, they were ‘all in’ for a creative design challenge about the Earth’s moon,” said O’Connell engineering teacher Melissa Pore. “Through sheer curiosity, and in the end, perseverance, these students churned out multiple ideas and various strategies as they encountered road bumps and hurdles before creating the ultimate interface for astronaut training and lunar navigation intended for the Artemis mission astronauts. I am so proud of them.”

NASA could use concepts from an app local students coded to navigate the moon in 2024, Arlington Now, Jan. 15, 2021