Crew Finishes Season with a Silver at Nationals 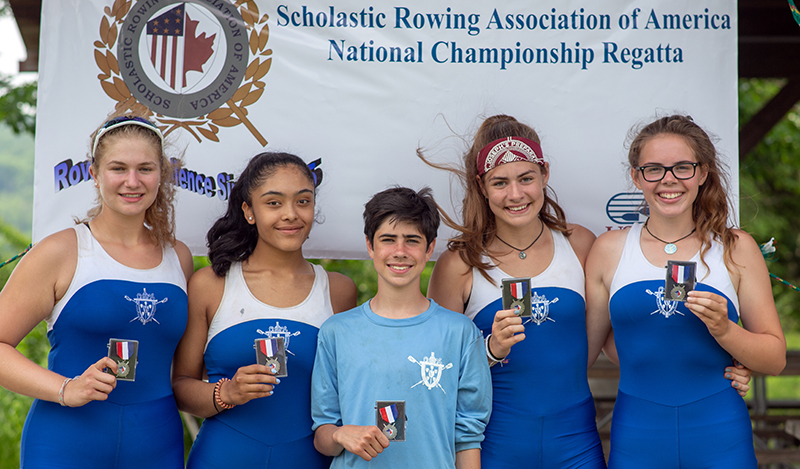 The Bishop O'Connell rowing team had a very busy month of May, starting with the Washington-area championships, and then followed by the Stotesbury Regatta in Philadelphia and Nationals in Ohio.

Washington DC Championships - On May 5, O'Connell rowing took to the Georgetown waterfront for the 13th annual Washington Metropolitan Interscholastic Rowing Association (WMIRA) Championships. The varsity teams took home medals in each of their six events, with both the boys and girls teams earning trophy's for the most team points. The girls were awarded the Admiral's Cup and the boys were awarded the Robert E. Day Jr. Cup. In addition, four O'Connell boats qualified for the National Championship later in the month.

"To have each of guys boats place first or second was a great accomplishment," said the boys' head coach, Lisa Dorn. "Being able to claim the overall points trophy for boys fours was a matter of teamwork with each boat/rower/coxswain stepping up and performing to earn maximum points on the day. The energy for both the guys and girls teams coming in and off the dock was contagious."

Stotesbury in Philadelphia - On May 17-18 on the Schuylkill River in Philadelphia, the girls and boys teams competed in the largest scholastic regatta in the world, with over 200 schools competing in the 93rd Annual Schuylkill Navy series 2019 Stotesbury Cup. O'Connell had three boats advance to the Grand Finals. The girls Junior Four, where 'junior' is a designation for no seniors in the event, finished in third place earning silver medals. The girls lightweight four and the boys junior four finished in 4th and 5th place respectively.

National Championships - The winning results at WMIRA earlier in the month allowed four O'Connell boats to qualify for the Scholastic Rowing Association of America National Championship Regatta, held at Dillon Lake, Ohio on the weekend of May 25-26. The first day of competition showed power and promise for the team. By day two, two of the four crews representing O'Connell advanced to the Grand Final, with the girls JV Four (meaning no senior on the team) bringing home the silver medal.

"Our team is poised to have a really successful season next year," said the girls' head coach, Dan Brisson. "I'm really looking forward to coaching them through it!"