50 Years of Service as an IHM Sister 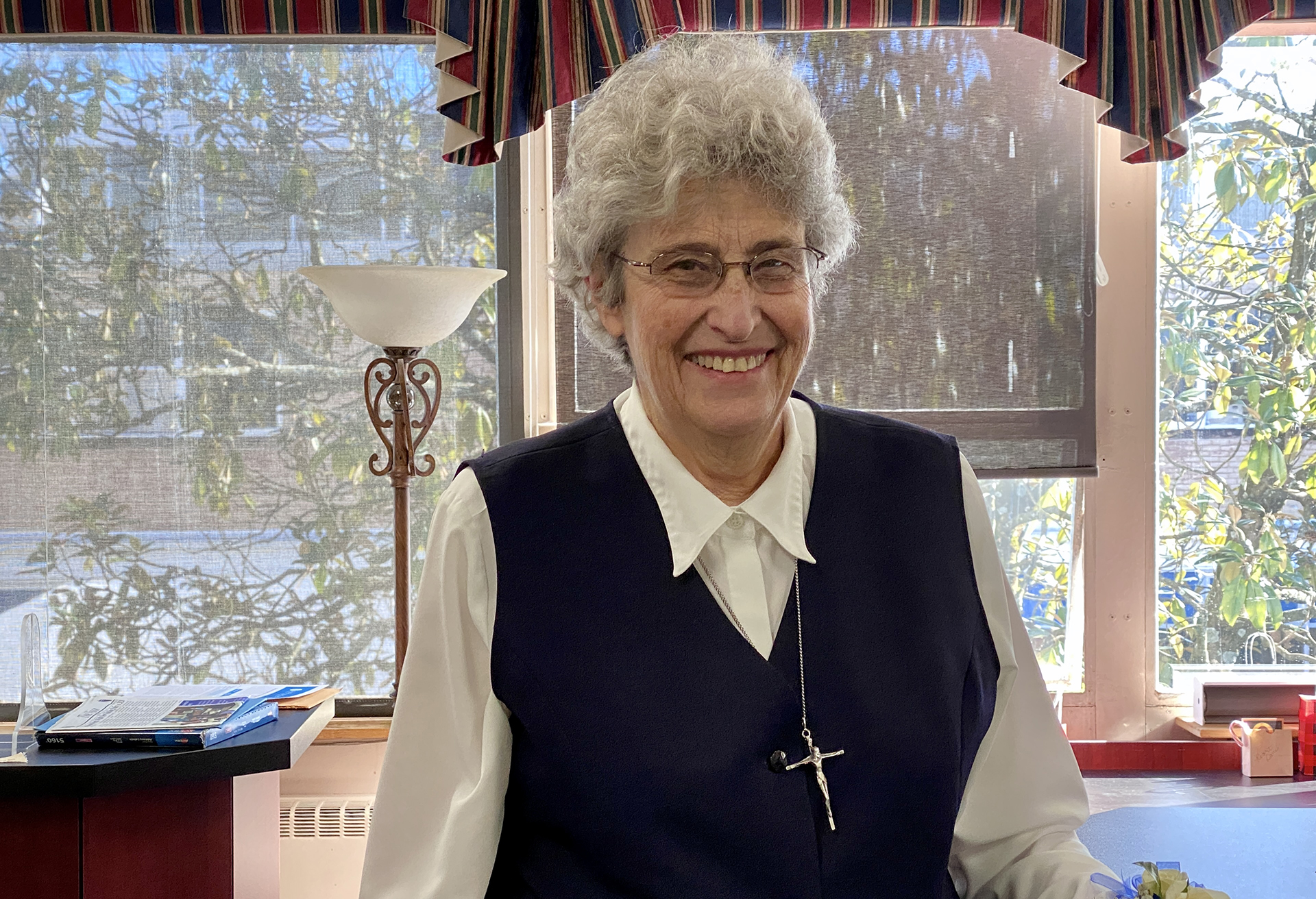 Each year on the occasion of the Solemnity of the Immaculate Conception, Bishop O’Connell’s Sisters, Servants of the Immaculate Heart of Mary (IHM) renew their vows during the school Mass. This year, the school community took a few extra moments after Mass to recognize and celebrate one of the sisters who is celebrating her 50th Jubilee Year.

Meet Sister Catherine Hill, IHM, Dean of Academics at Bishop O’Connell since 2009. In this role, she creates the master schedule and oversees grades and other academic matters.

But Sister Catherine’s connection to Bishop O’Connell doesn’t start there. It begins back in the 1960s, when she graduated from eighth grade at St. Agnes and enrolled as a freshman at O’Connell, joining the class of 1966.

Saying Sister Catherine excelled at O’Connell is an understatement. She discovered her fondness for math, science, and debate, honed her athletic talents on the basketball court, and became involved in a multitude of leadership and service opportunities. Her senior yearbook said it best: “Take one large volunteer, blend in two heaping tablespoons of intelligence and one level teaspoon of athletics. Mix well with spontaneous laughter...Season with initiative and leadership ability. Serve on a speech platter. Garnish with Student Council buttons. Makes one deluxe Cathy Hill.”

She graduated first in her class at O’Connell before heading to Carnegie Mellon University (then known as Carnegie Tech) in only the second year that the Chemistry program was open to women. Once comfortable with knowing she could successfully handle the challenges of life on her own, she applied to the Immaculate Heart of Mary and entered as a postulant in September, 1967.

Sister’s years of service in the community include teaching in several parish schools in Philadelphia, then moving to teach high school chemistry and other subjects. Before coming to O’Connell, she worked as Vice Principal at Bishop McDevitt High School in Harrisburg, Penn.

In 2005, Sister Catherine returned to her high school alma mater as a Chemistry teacher, before taking on the role of Dean of Academics a few years later.

Joining O’Connell’s science department and teaching in classrooms where she had originally sat as a student gave Sister the chance to combine memories and vision. Supporting renovations to the science lab and constantly broadening department offerings have been highlights of her connectedness to science colleagues.

“Over these last fifty years, God has allowed me to meet many people and live in places I never would have expected,” said Sister Catherine. “Each encounter was a blessing for me, enriching me and deepening my appreciation for my vocation. It is the goodness of those around us that always draws out the best out of each of us and leads us to offer our gifts in service to others.”

On the occasion of Sister Catherine’s jubilee, Head of School Bill Crittenberger said it this way: “Sister Catherine is known to provide five thoughtful and excellent-fitting solutions to any question that arises in a group meeting, spot-on solutions that she always delivers with humility, grace, and warmth. The number five, therefore, works out nicely as a metaphor for Sister, as she is both a supernova and the twinkle twinkle in our collective mind’s eye: bright, inspiring, and illuminating.”