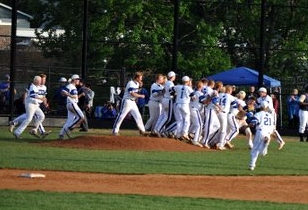 With a convincing 10-2 victory on Wednesday evening at Jacobs Field at Burch Stadium in Arlington, the O’Connell baseball team finished off their comeback in the WCAC semi-final series over Good Counsel.

Senior Hayden Basse was outstanding on the mound with a complete game. The Falcons came out the gates fast with two runs in the top of the first inning, but the Knights answered with three runs of their own in the bottom half of the frame.  Sophomore center fielder Myles Hudzick hit the first of his two doubles on the game to lead things off for O’Connell. Sophomore shortstop Patrick Ryan and sophomore designated hitter Rafi Vazquez both drove runs in with base hits, and senior catcher Drew Tessier gave the Knights the lead with an RBI sacrifice fly.

O’Connell would never relinquish the lead while tacking on five runs in the fourth inning with big blows coming from Ryan and junior third baseman Brian Murray with a bases-loaded double.  The Knights added two more in the 5th and Basse, along with strong defense behind him, cruised to the 10-2 win.

The Knights advance to the WCAC championship series where they’ll meet top-seeded St. John’s.  The series will be played at Shipley Field at the University of Maryland in College Park. The first game will be played Friday, May 9 at 7 p.m. Game 2 is scheduled for Saturday, May 10 at 2 p.m. If necessary, the third game will be played Sunday, May 11 at 1 p.m.

In two tightly played ballgames in the regular season, St. John’s defeated O’Connell, but the Knights will look to ride their current momentum through the championship series.